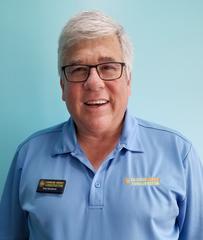 Paul came from a background as a sales representative in the fast-paced television advertising business and also served an eight-year stint in the U.S. Navy, as a combat cameraman. Active with the American Resort Development Association (ARDA), Paul was a frequent speaker at ARDA educational sessions and has been called upon to write for DEVELOPMENTS magazine. He served on the ARDA Resort Owners Coalition (ARDA ROC) Board of Directors representing Homeowner Associations. Paul has spoken to State Senate and House Committees on industry related concerns.

Paul became interested in Solar when a Resort he supervised added a 1,887 solar panel system. This system started saving the resort thousands of dollars each month. After retiring from property management he began consulting in the solar business locally, always excited about the savings to his customers and benefits to the environment.

He readily serves in his local community (he is a past Chairman of the Horry County Accommodations Tax Advisory Committee) and works with local government on community improvement projects. Paul is also involved in various civic and church activities, including serving as a church Elder and working with Missions to the World, a non-profit group assisting underprivileged citizens of third world countries.